You are not alone. Employers and workers alike find these terms confusing to say the least. This article explains difference between the National Living Wage rate and the National Minimum Wage rate and shows the new increased rates from 1st April 2019. 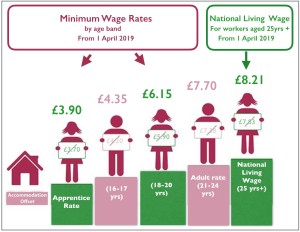 What is the National Minimum Wage? (NMW)

The National Minimum wage (NMW) is what it says: the minimum pay per hour most workers are entitled to by law. Workers includes all employees and workers: part-time, flexible and agency workers and those working under apprenticeship schemes. There are different rates for each age group, from school leavers (16yrs) upwards.  The government sets these rates and reviews them yearly. The rates change in October each year and are advised by the independent body Low Pay Commission.  The increases in this years National Minimum wage rates were  recommended by the Low Pay Commission.

All employers are legally obliged to pay the National Minimum Wage, irrespective of their size.

What is the National Living Wage? (NLW)

So,what is the Living Wage? 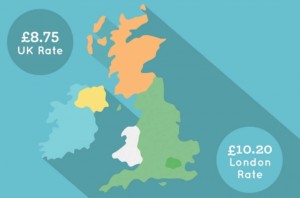 A few important points to remember about the National Living Wage and The National Minimum Wage.

Employees concerned they are not being paid the NLW or NMW are advised to check with Acas then speak to their employer in the first instance and raise a grievance if necessary. They can report an employer to HMRC and take their employer to a tribunal (following early conciliation through Acas) if the situation remains unresolved.
Back in 2016 the government started to name and shame companies who fail to pay the National Minimum Wage.
A package of measures intended to improve compliance with the NMW and the NLW  include:

For more information or queries about issues discussed in this article, please contact Abigail Oprey by email. To speak directly with Abigail or any other of The Legal Partners team of specialist business and HR lawyers based at our Richmond UK office, or our partner lawyers in Singapore or Guanzhou, please call +44 203 755 5288

Keep Up To Speed